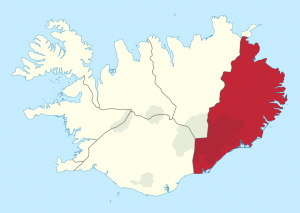 The largest town in the region is Egilsstaðir, with a population of 2,300. The oldest municipality is Djúpivogur, which got their trading licence in 1589, had a population of 470 in 2015.

One of the best known spar mining quarries in the world is in “Helgustöðum” in Eskifjörður with its Iceland spar (solar stones).

The only car and passenger ferry that sails between Iceland and the European continent calls at Seyðisfjörður once a week in the summer months and intermittently the rest of the year.

Click Here to go to map for directions in Eastern region